What, dear friends, is a Leibster? I don’t know, and I don’t have enough expendable internet to look it up, so I’m going to assume from the spelling that it must be some sort of German strudel. Why is it relevant? Because Tamara from One Magic Bean Buyer just nominated my blog for a German strudel award!

First things first, I have to answer her questions:

If you could have any talent in the world, which one would you choose? I’m a musician, so I’d like to become a better spoon player, leaf whistler or Mongolian throat-singer.

What's the number one most played song on your iPod? Well since I look 23 but am actually a closet 80-year-old I’ve never actually owned any portable music playing devices. However the song most hummed as I’m doddering about would have to be Gimme Shelter, by the Rolling Stones.

Name three writers you admire and tell us why. Charles Dickens – because A Tale Of Two Cities is the best thing I’ve ever read.  Catherine Ryan Howard – because she’s successfully self-published, her blog is amazing, and she is a constant source of inspiration and entertainment. And Jane Austen – because I’ve read her early works and even as a teenager she was witty, sarcastic, and already challenging the social norm.
Plus, she gave us Mr. Darcy.
If you were reincarnated as an animal, what would you want to be? My favorite animals are goats but since they’re a tad lower on the food chain than I’d like, I’d go for my second favorite – a tiger.

What is one of your favorite quotes?
And on the bank a lonely flower he spied,
A meek and forlorn flower, with naught of pride,
Drooping its beauty o’er the watery clearness,
To woo its own sad image into nearness.
– John Keats, ‘I Stood Tip-Toe Upon A Little Hill’.

What chore do you hate doing? Do I have to pick just one? It’d have to be getting a doona (that’s Australian for quilt) into a doona cover. 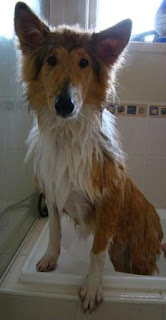 What is your favorite month of the year? September – because not only is it the first sign of summer, but it's also the first time all year I can wash my smelly dog without her staying wet for a week.

If you could throw any kind of party (money is no object) what would it be? And for who? I’d throw a Hogwarts-style Christmas party for families on the streets or who are too poor to have a proper Christmas.

If you could choose to stay a certain age forever, what age would you stay? Twenty one. (Would that make my inner self only 78?)

If you had to change your first name, what name would you want? I've always liked Amabel, my middle name, so I'd probably pinch that.

Which superpower would you pick if they were up for grabs? I’ve said this before and I’ll say it again – I’d have telekinesis, so I could easily get the dirt out of my carpet.

And there you have it! Now on to the rules for my award nominees:

Can you tongue roll, cross eye, ear wiggle or perform any other feats of physics? (And you can’t say getting motion sick at the slightest provocation, because I call dibs on that).
Would you rather watch that video from The Ring, or start up a nice, family-friendly game of Jumanji?
If you could be any book character, who would you be and why?
What fantasy invention do you most wish was real? e.g. Light sabres… invisibility cloaks… or those completely innocent and in no way drug riddled potions from Alice In Wonderland…
Name one habit you’re trying to break.
What’s the scariest book you’ve ever read? (Because I feel like sleeping with the light on for a month).
What was the first job you ever wanted?
What was the first job you ever had? (Sorry!)
If you had to live in any time period, past or present, other than now, what would you choose?
What’s the most exotic place you’ve ever been?
Finally, if you could apparate, where in the world would be your favourite spot to take your lunch breaks?

And last but not least, my nominees. Go check them out:

Room Thirty3
The One With Rachel's Book
To Begin With
The Nook
The Enthusiastic Cynicist
A Novel Journey
Alice's Literary Salon
Page Girl's Page
Ink And Alchemy
Oh, The Things I've Learned
And since blogging is meant to be fun, my final nomination can go to the first to call dibs in the comments. Ready. Set. Go!

P.S. Hi to any new visitors to the blog! I've got a super massive $30 ebook voucher giveaway coming up next week, so feel free to stick around!

Email ThisBlogThis!Share to TwitterShare to FacebookShare to Pinterest
Labels: Blogging